One of the best Assassin heroes right now is Benedetta. With the use of the right Benedetta build, this hero will have extraordinary strength. 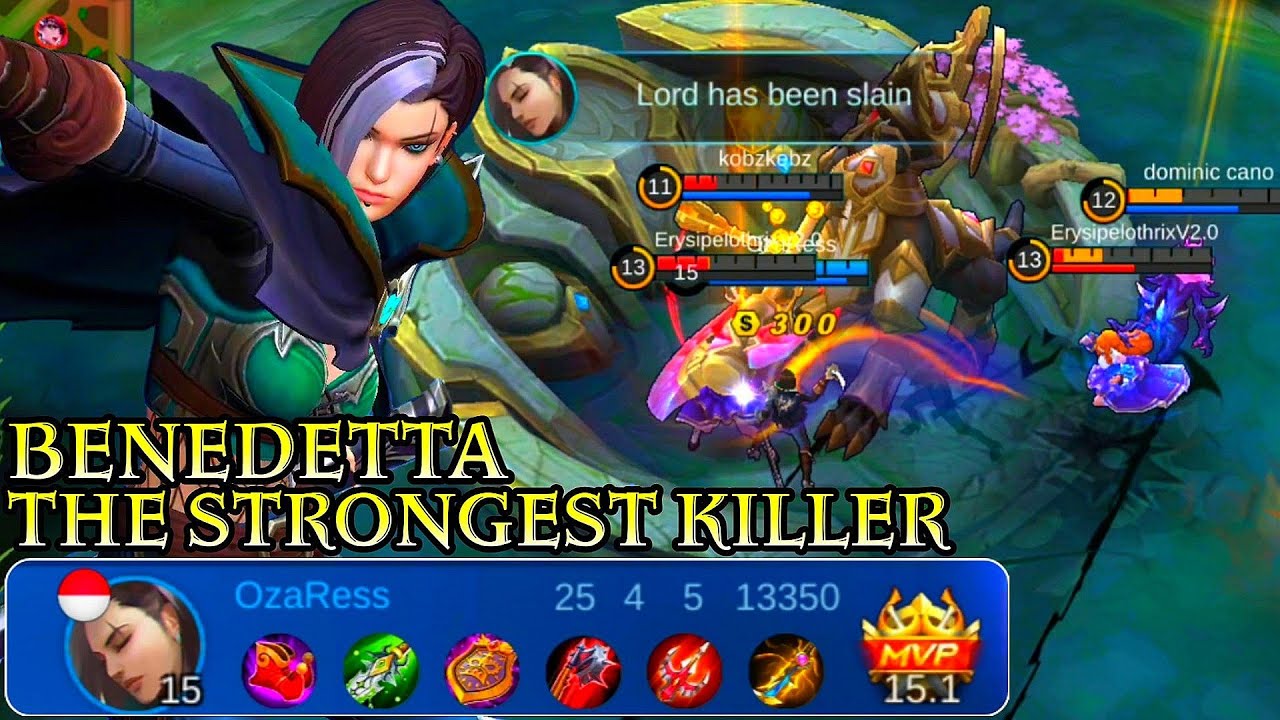 Game news update - One of the best Assassin heroes right now is Benedetta. With the use of the right Benedetta build, this hero will have extraordinary strength.

Benedetta is arguably a hero who has deadly skills. Now, to support these skills, you need to use the right Benedetta build item.

On this occasion, Smart Tips want to tell you the best Benedetta build that you can use in the match. So just take a look at the reviews below!

Yaps!  With the skills possessed by Benedetta, this hero will have quite an agile movement. Especially with his passivity, this hero can move in all directions easily.

So, to support the skills that Benedetta has, maybe you can try Benedetta's recommendations for builds, which are presented below.

To make Benedetta have a deadly attack, then you need to use the right build item.

The following build items for Benedetta have certainly been tested and are highly recommended for you to use. Because this build is very effective for finishing off opponents.

This Benedetta build makes him have such deadly power. You can easily get savage using this gear.

1. Endless Battle - After Benedetta releases the skill, the next attack will produce even more damage

2. Blade of the Heptaseas - This item allows Benedetta's skill to reduce your opponent's Physical Defense.

4. Hunter Strike - After attacking the enemy 5 times in a row, Benedetta will get an additional Movement Speed ​​of 30% for 2 seconds.

5. Blade of Despair - This item can increase Benedetta's attack when fighting enemies with HP below 50%.

With the use of this build item, Benedetta will have a stronger defense.  So that it will be stronger and more resilient when dueling with opponents.

1. Endless Battle - After Benedetta releases a skill, the next attack will produce even more damage.

2. Blade of the Heptaseas - This item allows Benedetta's skill to reduce your opponent's Physical Defense.

3. Athena's Shield - Every 30 seconds if not attacked, Benedetta will get a shield that can absorb enemy attacks.

4. Wings of the Apocalypse Queen - When Benedetta's HP is below 40%, this item will reduce the damage received by 50%, as well as increase the Lifesteal effect.

5. Immortality - Allows Benedetta to revive after being killed.

In order for Benedetta to be fast in farming, the use of this build item is very appropriate.

Raptor Machete - This item is indeed a special item for Farming, guys.  You can replace this item with other items when it is late-game.

1. Endless Battle - After Benedetta releases a skill, the next attack will produce even more damage.

3. Blade of the Heptaseas - This item allows Benedetta's skill to reduce your opponent's Physical Defense.

4. Blade of Despair - This item can increase Benedetta's attack when fighting enemies with HP below 50%.

So, those are some recommendations for the sick Benedetta build that you can use in battle.  These build items are also often used by global top players, so adjust it to the conditions in battle.

Explanation of the Benedetta Skill and its Combination Method

Benedetta is an Assassin Mobile Legends hero who has deadly skills such as Elapsed Daytime, Phantom Slash, An Eye for An Eye, and Electo: Final Blow.

If the Basic Attack button is released after the Sword Intent is fully charged, Benedetta will use Swordout Slash in the direction she is facing and dash forward.

Only when Benedetta is in Swordout Mode and her Sword Intent is fully charged by holding down the Basic Attack button can she release her Swordout Slash.

Benedetta retreated quickly and left a shadow ahead.  After a short pause, the shadow will slash forward into a fan-shaped area, dealing 300 (+ 60% Total Physical ATK) Physical Damage and causing a slow effect on enemies by 60% for 0.5 seconds.

Meanwhile, Benedetta dashed forward to cut, dealing 180 (+ 70% Total Physical ATK) Physical Damage.  (If the target hits its shadow, the damage dealt by Benedetta herself will increase to 200%. This skill only deals 40% Damage to Minions and Creeps.

Benedetta raises her weapon to defend herself, becomes immune to Crowd Control effects and blocks any damage in 0.8 seconds.

After holding out, he will stab in the direction indicated.  Deals 300 (+ 80% Total Physical ATK) Physical Damage.

If Benedetta manages to evade the Crowd Control effect while defending, he will gain the full Sword Intent and stun the target for 1.5 seconds.

Benedetta grabs Alecto and slashes forward after a short delay (not visible when dashing), slowing all targets in their path by 70% for 0.8 seconds.

After dashing, Benedetta will detonate her Sword Intent on the path, causing a Strangle effect on enemies with a Sword Intent for 2.5 seconds.  Deals 60 (+ 50% Total Physical ATK) Physical Damage and slows opponents by 20% every 0.2 seconds.

How to Combo Using Benedetta:

At first, you have to use Benedetta's passive skill to get close to your opponent.  Then attack the opponent using the Alecto skill: Final Blow (Skill 3).

Approach the enemy again using the An Eye for An Eye (Skill 2) skill.  End the opponent using the Phantom Slash skill (Skill 1).

So that if sorted will be:

As an Assassin, of course Benedetta needs a Custom Assassin Emblem to strengthen her abilities.

Recommended battle spell suitable for an Assassin is Retribution.  Because this spell can help Assassin heroes to do farming easily.

How to Use Benedetta to Get Better

Well, for those of you who want to learn Benedetta, you can follow the following tips so you don't take a wrong step when using this agile Assassin hero.

Benedetta's passive skill is able to make him dash in the direction determined by analog.  Therefore you must make the best use of this passive skill.

Also pay attention to the analog direction before releasing Basic Attack.  Because if you get the wrong direction, you might even dash towards the enemy.

2. Use Skill 1 to Repay Opponents

Benedetta's skills have a fairly short cooldown, one of the skills you can use is Phantom Slash (Skill 1).

The damage generated by this skill is also quite large, so it is very suitable to be used to repay the opponent's blood.  Besides that, you can also use this skill when doing farming.

Skill Alecto: Final Blow (Skill 3) Benedetta's has a considerable distance.  Besides that, the damage produced is also very high.  Well, you have to take advantage of this skill to finish off your opponent.