Benedetta Best Build In This Season

Latest Build Benedetta Mobile Legends - After Abyss returned, the entire southern part of the Land of Dawn turned into a barren plain. 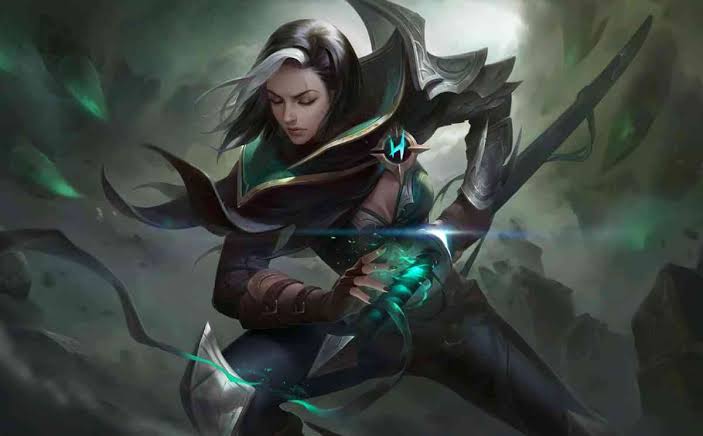 Latest Build Benedetta Mobile Legends - After Abyss returned, the entire southern part of the Land of Dawn turned into a barren plain.  The country that was once prosperous is now such a lonely place that people call it 'Despair Place'.

Those who live there always live in fear and despair.  However, their hopes shine even more when Benedetta and her team always try to protect the people in this place.

By upholding the name of his father who had fallen on the battlefield, he had always trained himself as a warrior.

And armed with his skill with swinging swords and bitter experience during wartime, he formed a team of Rangers and began to give hope to the people of Despair Place by driving out monsters and demons from the Abyss.

While holding down the Basic Attack button, Benedetta entered Swordout Mode and gathered her Sword Intent.

If you release the Basic Attack button after the Sword Intent is full, Benedetta will use her Swordout Slash in the direction she is aiming for and dash forward and deal 100 (+ 220% Total Physical Attack) Physical Damage to opponents in her path.

Benedetta moved back and left a shadow ahead.  After a while, the shadow unleashes a fan-shaped attack and deals 300 (+ 60% Total Physical Attack) Physical Damage.

Meanwhile, Benedetta will dash back to the front to slash and deal 180 (+ 70% Total Physical Attack) Physical Damage.

If the opponent is hit by his shadow, the damage from this skill will increase to 200%.

Skill 2 Benedetta - An Eye for An Eye (Blink and Buff)

Benedetta took up her weapon and defended, hereby becoming CC Immune and able to block any damage for 0.8 seconds.

After he survives, he will stab in the specified direction and deal 300 (+ 80% Total Physical Attack) Physical Damage.

If Benedetta is not hit by the Crowd Conrtol while defending, she gains full Sword Intent and stuns the target for 1.5 seconds.

Benedetta grasps Alecto and slashes forward after a moment, causing a slow effect of 70% for 1 second on opponents in line.

After dashing, he detonates the Sword Intent in its path and causes a Strangle effect to the opponent and Sword Intent for 2.5 seconds and deals 80 (+ 50% Total Physical Attack) Physical Damage and a slow effect of 20% every 0.2 seconds.

In this build, the focus is of course on Physical Attack and Cooldown Reduction items so that Benedetta will issue more skills.

Passive Ability: Breakout - For every 10 seconds, the next Basic Attack deals an additional 50-200 True Damage (increases with hero level).  Opponents will also be affected by a slow 30% effect for 1 second.  Cast a basic attack will reduce its cooldown

Passive Ability: Greed - Get an extra 25% EXP while jungling and recover 4% HP and 10% Mana after defeating a Creep.  Minions experience reduced by 40% within the first 3 minutes of the match.

Passive Ability: George - Creep elimination to increase Physical Attack by 4, up to a maximum of 15 Layers.

The Raptor Machete is used to make the farming process faster and the Physical Penetration attribute makes the damage from Benedetta even greater.

During the early game, you can buy Nimble Blade first and upgrade to Raptor Machete when completing the 3rd item purchase, Bloodlust Ax.

You can sell Raptor Machete and change it to Immortality during the late game.

Because Benedetta is a hero who relies more on Skill than Basic Attack, items with Cooldown Reduction are highly recommended to buy.

Bloodlust Ax is used because the Spell Vamp attribute is high enough so that Benedetta gets a HP regen when attacking an opponent with her skills.

Apart from that, the 10% Cooldown Reduction is also quite useful for Benedetta.

Passive Ability: Attacking an opponent who has HP below 50% will increase your hero's Physical Damage by 25% for 2 seconds.  (This effect is active before the attack enters the opponent)

There is no question about it, Blade of Despair will make the damage produced by Benedetta hurt more, especially if it attacks an opponent with less than 50% HP.

Passive Ability: Reduces damage received by 50% and provides additional 30% Lifesteal when HP is below 40%.  This effect lasts for 5 seconds and has a cooldown of 50 seconds.

We chose Queen's Wings item so that the soft Benedetta doesn't die easily, especially during the late game where the damage from the opponent's hero is no less painful than Benedetta.

Passive Ability: Obtain a shield that can absorb 510-1350 points of damage (increases according to hero level) for 3 seconds when HP is below 30%.  This effect has a cooldown of 40 seconds.

We chose Rose Gold Meteor because this item provides a Shield alias when the hero is dying, so this Shield could be Benedetta's savior.

When trying to execute a skill, of course we want it to be executed immediately, but unfortunately Benedetta has a skill animation delay which is quite annoying for her combo skill.

Benedetta has a quite annoying delay skill that makes it more difficult for us to get damage to our opponent.

We really have to know when is the right time to issue certain skills.

But once you are proficient, you will find it easier to finish off your opponent because basically all of Benedetta's skills have painful damage.

Now if this has become a common weakness of Assassin heroes who have high damage but low durability.

All skills from Benedetta are very beneficial for him to chase or run away from opponents because they are all Dash type.

Even the Basic Attack itself, if the Sword Intent is full, is dash type and can be used to pass through walls or barriers.

As is typical for other Assassin heroes, Benedetta's damage is very high.  Coupled with high mobility too, Benedetta is quite OP as an Assassin hero.

All skills from Benedetta are capable of attacking multiple opponents at once, including skill 2 which can cause a Stun effect.

With area damage, Benedetta has the advantage in Spell Vamp because the more opponents hit, the more HP we regen.

According to the GNU team, there are two suitable spell recommendations for Benedetta, namely Flicker and Retribution.

The Retribution emblem will of course make the farming process which is very important to Benedetta feel faster.

The second option is Flicker or Sprint which Benedetta can use to escape or chase opponents.

For the talents used, we prefer to use the Killing Spree talent which restores HP and increases Movement Speed ​​every time you kill an opponent.

But if your emblem level is still small, then the Physical emblem is fine, but it is certain that Benedetta's damage will not be as painful as when using the Assassin emblem.

That's the best Benedetta build version of GNU, the build above is just a recommendation so that the potential for savage or good at using Benedetta remains in your own skills.  See you in the next article.