Best Build Kimmy, who is a Marksman and Mage type, has a Demage / Poke specialty with a fairly large Ability Impact level and its use is not very 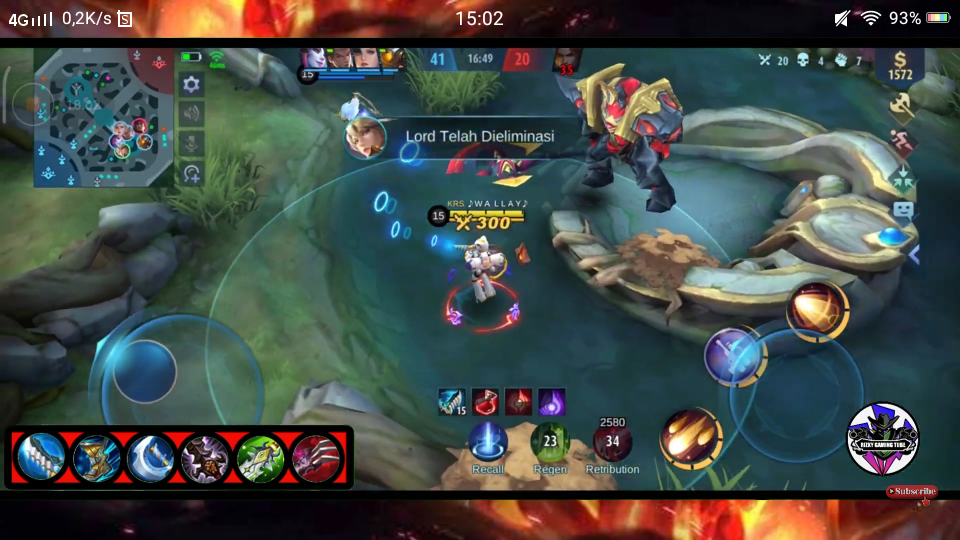 Kimmy's build is very deadly pain - Kimmy is the starting hero and one of them is in the mobile legends game which has a different control method from other heroes, he can carry out attacks continuously even though there are no enemies, for that matterbecause Kimmy has 2 analog buttons without the basic attack button like on other heroes.

Not only unique in terms of control, in fact Kimmy is a Hybrid hero combination of Marksman and early Mage in the Mobile Legends game. Kimmy is able to be a big demage contributor at the beginning of the game even though he has the status of Marksman.

surely with its uniqueness in the scope of the hybrid hero, there are so many Item Build compositions that can be attached to it, so it's no wonder if later when you carry out the Mobile Legend Match Making Gameplay you want to create 2 Mage or Marksman as well.

In fact, the composition of 2 Mage or Marksman with Kimmy, among others, is not bad, this has been proven in world-class tournaments such as M1 where Kimmy is often paired with Marksman and Mage heroes, especially since Kimmy can be said to be a hero who is the mainstay of thisthe winner of the Evos Esport Indonesia victory.Notes of Contents

Best Build Kimmy, who is a Marksman and Mage type, has a Demage / Poke specialty with a fairly large Ability Impact level and its use is not very difficult to make him a very popular hero, especially even in the proplayer class.

In Tear Myhtic, this hero is very often found in the composition of their hero as the determinant of victory. Kimmy really needs a pretty good guard, a hero like Lolita can be a very good playmate when it comes to protecting.

Description and Usage of Kimmy's Skill

To optimize Kimmy's expertise to its peak, of course not only do you have to have a build item that really synergizes with Kimmy, you must also know what happened to the use of Kimmy's skills.

The following is the Usage and description of Kimmy's Skill that you must understand.

passive (Chemist 's Instict)This passive is the main source of the uniqueness of Kimmy itself, this passive can make Kimmy move and aim in the direction he determines using a Spray Gun, but control of the Spray Gun is not an easy matter so you have to really hone your skills when using Kimmy.

with a large Demage and Sprey Gun who can share attacks continuously without breaking can make this hero a very deadly hero in a battle.

Kimmy fires Chemical Spray in the specified direction and he is about to move backwards within a certain distance, the Camical Spray that is fired is about to make an impression on the ground and the opponent moving on the surface of the falling Chemical Spray will receive + 30% Total PhysicalATK + 40% Total Magic Power and distributes Slow Impact by 40%.When you use this skill, Kimmy wants to regenerate 40 of his energy.

With a short cooldown, you can easily spam skills to retreat or rub your opponent or just increase your energy when you are carrying out an attack.

Kimmy made Luminous Chemical ATK in the form of a rocket and after carrying out the Charge Kimmy wanted to fire the rocket within a certain distance and distribute a damage of 238 + 180% Total Physical ATK + 210% Total Magic Power.

After using this skill, Kimmy wants to regenerate the 30 Energy he has.

With a large damage and quite a long distance, you can use this skill to give a large damage practically or kill opponents who are trying to escape from your pursuit.

skill 1+ Skill 2+ Skill 3for us, of all the heroes, only Kimmy has a combo that is very easy when compared to other heroes, where when you carry out a combo that you need to go through, just spam skill 1 to repay your opponent's HP, Use Skill 2 for bonus Energy then end with Ultimate AsClosing.

As a hybrid hero, surely the arrangement of the Kimmy Build mix that can be installed on this hero is quite a lot, so that some builds will arise to be recommended because each Kimmy Build item wants to use it differently.

sort of what we have explained above, So here are the Suggestions for Build Kimmy Pain, It is very suitable for you to use.

As a Hero Hybrid, not only builds, in fact the emblem of this hero also varies from Marksman, Mage, Assassin to even Junggle, so the selection of Kimmy's emblem set itself can be the main aspect of Kimmy's full power awakening.

Use the Mage or Assassin Emblem Set if you really want Kimmy to be a killer hero, use the composition of 3 Agility, 3 Obsevation and the talent of Bounty Hunter to make Kimmy even faster.

The Junggle Emblem set is the next suggestion that is very suitable for those who carry out fighting teams with friends, the reason is not only that you want to be faster so in fact this emblem also wants to make it easier for you to carry out contests against turtles and lords during a match.Battle Spell

For those of you who play Team more often, it would be better if you use the assassin emblem set and the Battlle Spell Sprint to optimize the skills of Kimmy, you can easily chase enemies freely with a cover from someone's tank or support.

use Battle Spell Purify If you play solo more often it will be more functional if you use this Battle Spell, because in the review above we have described the skills that Kimmy has, which in fact does not really have a skill set for escape, so for those of you who are worriednot covered by your team eating Puryfi can be a solution.So that's our little short discussion about the Painful Kimmy Build 2022, for those of you who are curious. Good luck, For those of you who have suggestions for Build Other Items, please tell us in the opinion column. Thank you.